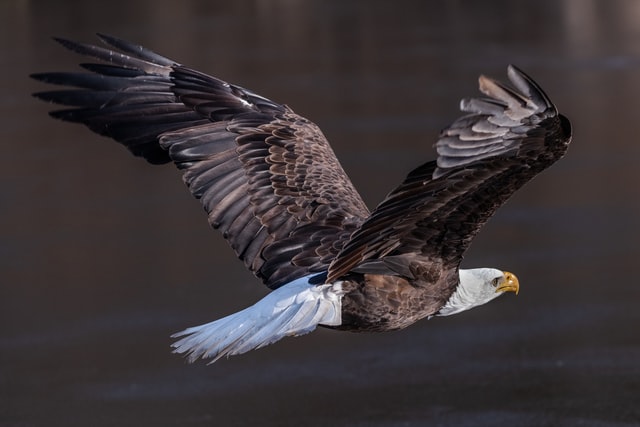 OUT OF THE PIT

“Bless the LORD, O my soul,” begins David in one of his most well-known psalms, “and all that is within me, bless his holy name! Bless the LORD, O my soul, and forget not all his benefits…” And what are the specific ways that God deals kindly with His people? “Bless the LORD… who forgives all your iniquity, who heals all your diseases, who redeems your life from the pit, who crowns you with steadfast love and mercy, who satisfies you with good so that your youth is renewed like the eagle’s.” (All words in quotations from Psalm 103:1-5)[1]

The Lord deals kindly with His people by graciously reversing our pitiable condition. He treats us far better than we deserve to be treated. Our iniquity is enough to ruin us forever, but “He does not deal with us according to our sins, nor repay us according to our iniquities.” (Psalm 103:10) Instead, “so great is his steadfast love toward those who fear him” that “he [removes] our transgressions from us” (Psalm 103:11, 12).

While iniquity is the chief destroyer of life and the source of all our troubles, unremitting disease also takes a hard toll and works death. In Israel’s experience under the old covenant, good health was typically one of the fruits of walking in obedience, whereas disease was one of the consequences of walking in disobedience. While this connection between spiritual health and overall health is much stronger than we often assume, it is also true that we may be afflicted with disease simply because we live in weak bodies within a fallen world, and not because of any particular level or pattern of sinning. In either case, the call upon us is to draw near to the Lord and trust Him to grant us relief, healing, and strength. Sometimes we fail to consider how many times the Lord has, in fact, healed us from various diseases or injuries. If you belong to Him, then He will heal every malady – if not in this age, then in the age to come.

The reference to “the pit” in verse 4 rounds out the threefold description of our pitiable condition. What are we in our fallen condition? We are spiritually depraved (“iniquity”), physically diseased (“diseases”), and circumstantially doomed (“the pit”). We may find ourselves in the pit because we have sinned or because we have been sinned against; we may find ourselves on the verge of destruction because of our obstinate foolishness or because we are suffering opposition, injustice, and persecution. When we are in “the pit” on account of our own rebellion, the escape comes through our repentance and the Lord’s readiness to forgive. When we are in “the pit” on account of mistreatment from others, the escape comes through the Lord’s gracious intervention. Always remember this: “The LORD works righteousness and justice for all who are oppressed.” (Psalm 103:6) The Lord’s readiness to rescue His people from dark pits is illustrated many times throughout the Scriptures.

For example, Joseph was placed in a pit, sold into slavery, and imprisoned on a false charge (Genesis 37-40), but in due course the Lord redeemed Joseph’s life from the pit and “[crowned] him with steadfast love and mercy”. In Joseph’s case, his invisible crowning was accompanied by his visible crowning as prince over the land of Egypt (Genesis 41). From the pit to the palace! A prisoner becomes a prince!

David endured much mistreatment on the path to the throne (1 Samuel 15 - 2 Samuel 5). He also faced affliction after becoming king, although much of his post-enthronement suffering he brought on himself. In any case, David testifies again and again about the Lord’s gracious deliverance. For example: “He drew me up from the pit of destruction, out of the miry bog, and set my feet upon a rock, making my steps secure.” (Psalm 40:2) From sinking in a bog to standing on a rock!

Daniel, though an exile from Judah, had also been crowned with princely authority, first in Babylon and later in Persia. The victim of a jealousy scheme, Daniel was eventually placed in a den and fed to the lions, but by Daniel’s faith (Hebrews 11:33) and God’s power the mouths of the lions were shut (Daniel 6). The next day the Lord brought Daniel out of the den and renewed Daniel’s prosperity as high official in Persia. Henceforth the truth was proclaimed throughout the Persian Empire: “the God of Daniel… has saved Daniel from the power of the lions.” (Daniel 6:26, 27) From the company of lions back to the corridors of power!

Time would fail us if we went on to speak of righteous Job, who had to plod through prolonged and severe suffering (Job 1-42); and of faithful Jeremiah, who was thrown “into the cistern” and “sank in the mud” (Jeremiah 38:6); and of disobedient Jonah, who was swallowed up and was consequently “in the belly of the fish three days and three nights” (Jonah 1:17); and of forlorn Naomi, who returned to her homeland empty (Ruth 1:21); and of oppressed Mary Magdalene, who was held hostage by seven demons (Luke 8:2); and of fearless John the Baptist, whom Herod threw into prison (Luke 3:19-20). Job was restored, Jeremiah lifted out, Jonah “brought up… from the pit” (Jonah 2:6), Naomi filled, Mary delivered, and John… beheaded. John’s beheading doesn’t fit the pattern, except that it does when we remember that the God of rescuing grace completes His work in the age to come. John was like his ancestor Abraham who “was looking forward to the city that has foundations, whose designer and builder is God.” (Hebrews 11:10) For God’s faithful ones, every circumstantial doom not reversed in this present life will be gloriously and forever reversed in the new heaven and the new earth.

Of course, the ultimate rescue “from the pit” took place in regard to our Lord Jesus Christ. Suffering not only mistreatment at the hands of cruel men but also, and more importantly, divine judgment on account of our sins, He was given over to death. Even so, the Father would not “let [his] Holy One see corruption” and therefore “[loosed] the pangs of death” (Acts 2:27, 24). From the shame of death by crucifixion to the honor of exaltation at God’s right hand (Acts 2:23, 32-33).

From the cross to the crown is the pathway not only that the Lord Himself has trod but also the pattern for the Lord’s followers: “if we endure, we will also reign with him” (2 Timothy 2:12).

To sum up our reflection on Psalm 103:1-5, isn’t it remarkable that diseased, downcast, and doomed sinners can become forgiven, whole, and flourishing sons and daughters with crowns on their heads and youthful vigor in their hearts? Such is the gift of the Lord’s “steadfast love and mercy” to His dear children. Live in this rich grace! And pray into it, too:

Father, forgive our many sins, even as we forgive those who have sinned against us. Heal our many maladies, including the colds and viruses that are affecting your people this very moment. Rescue us from the many obstacles and setbacks that have borne down on us, and from the dangers and threats that are sure to come. Continue your grace and mercy toward us, and give us life and strength to walk as your beloved children. Grant us renewed appreciation for the decisive victory that has already been achieved by Jesus Christ, as well as renewed anticipation of the glorious consummation that will overtake us when eternity dawns. Manifest your presence in and through our church family to such an extent that unbelievers would take note and be compelled to seek after Jesus with their whole heart. In the Savior’s name we pray, amen.

[1] Scripture quotations are from The ESV® Bible (The Holy Bible, English Standard Version®), copyright © 2001 by Crossway. Used by permission. All rights reserved.