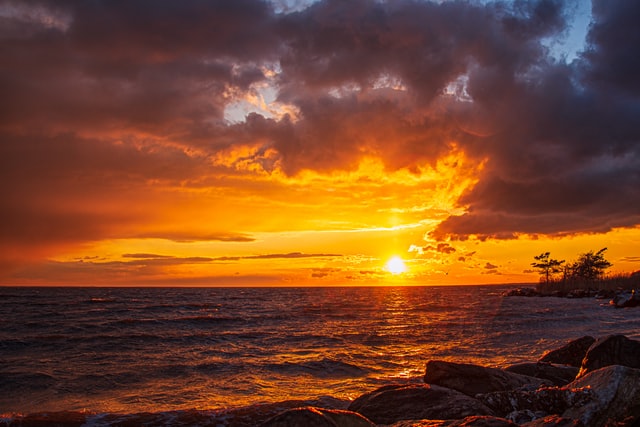 Many of us, like so many of our fellow Americans, are eager to know the outcome of the presidential election. The stakes are high, for the two candidates have very divergent approaches in terms of how they would govern our country.

At such a time as this, it is important to hear the words of Jesus: “Do not fear; only believe.” (Mark 5:36 ESV) The point, of course, is not to believe that our desired electoral result shall come to pass. The point, rather, is to believe in the Lord who is sovereign over the whole world. He says to us on a dim-lit and windy sea: “Take heart; it is I. Do not be afraid.” (Mark 6:50 ESV) When the Lord draws near, we can take heart. Or to put it another way, when we draw near to the Lord, we are able to “receive mercy and find grace to help in time of need.” (Hebrews 4:16 ESV)

In order to encourage us to take heart amid the uncertainty of the election, briefly consider these seven biblical truths:

1) Although we are tempted to be intimidated by the rulers of this present world, all human beings – including the world’s powerful – are small in God’s sight: “It is he who sits above the circle of the earth, and its inhabitants are like grasshoppers; who stretches out the heavens like a curtain, and spreads them like a tent to dwell in; who brings princes to nothing, and makes the rulers of the earth as emptiness.” (Isaiah 40:22-23 ESV) The future for all ungodly rulers is unremitting bleakness.

2) Further, the future of all ungodly plans is utter failure. God is not frustrated by the plots and schemes of men. Instead, God is the sovereign Frustrater who nullifies all foolish nonsense: “The LORD brings the counsel of the nations to nothing; he frustrates the plans of the peoples. The counsel of the LORD stands forever, the plans of his heart to all generations.” (Psalm 33:10-11 ESV) God is not only the great Frustrater of worldly agendas, but also the great Fulfiller who oversees the ultimate success of His counsel and His plans. God’s kingdom shall come! And yet, He works on His timetable, not ours.

3) God ordains all that comes to pass, including the rise and fall of human rulers: “he removes kings and sets up kings” (Daniel 2:21 ESV). For His own holy purposes, God raised up Pharaoh, Nebuchadnezzar, Cyrus, and Pilate – and in due course all faded from the scene. Equally, God established the kings of Judah and of Israel, one after another, and the majority were not godly men.

4) God is sovereign over the ends as well as the means to those ends. From a human perspective, it would have looked like Israel and Judah were torn apart because of Rehoboam’s foolishness. But that limited human perspective is actually inaccurate. In truth, Rehoboam acted foolishly because it was the Lord’s will to tear Israel from Judah and establish Jeroboam on Israel’s throne in accordance with His previously spoken word. God’s pre-determination of the outcome brought about the means of Rehoboam acting foolishly: “So the king [Rehoboam] did not listen to the people, for it was a turn of affairs brought about by the LORD that he might fulfill his word, which the LORD spoke by Ahijah the Shilonite to Jeroboam the son of Nebat.” (1 Kings 12:15 ESV) There are a number of other examples like this in the Scriptures. So take heart as you consider the ‘unknown to us’ outcome of the presidential election. First, God has ordained the outcome and He has ordained the means to the outcome. Every voter, every voting machine, every ballot lawfully cast and accurately counted, every honest human effort to facilitate a just and fair election, every ballot unlawfully cast or inaccurately counted, every technical error or human error, every unsavory scheme of men injected into the equation, every lawsuit, and every court decision is included within the scope of the means that God orchestrates in order to accomplish the outcome that He has ordained. Second, human beings should apply this truth not by attempting to manipulate the means, but rather by humbling themselves before God: “and he does according to his will among the host of heaven and among the inhabitants of the earth; and none can stay his hand or say to him, “What have you done?”” (Daniel 4:35 ESV)

5) God has promised that He will see to it that all things serve the ultimate and eternal good of those who trust Jesus. All things includes all the means and ends in a general election, plus everything else going on everywhere in the world: “And we know that for those who love God all things work together for good, for those who are called according to his purpose.” (Romans 8:28 ESV) I am confident that one candidate’s overall approach to governance will help to advance human flourishing within our land, and that the other candidate’s overall approach will fail to do so. But be absolutely sure of this: God will be faithful to keep His promises to His people regardless of which candidate’s victory He has fore-ordained. God will be faithful to sanctify us and make us fruitful and prepare us for glory, regardless of who occupies the White House.

6) If the presidential election goes your way, keep perspective: “those who rejoice [should live] as though they were not rejoicing…. For the present form of this world is passing away.” (1 Corinthians 7:30, 31 ESV) We legitimately care about the world’s ups and downs (and in moderation we can celebrate the ups), but we don’t get carried away, because “here we have no lasting city, but we seek the city that is to come.” (Hebrews 13:14 ESV)

7) If the presidential election doesn’t go your way, keep perspective: “those who mourn [should live] as though they were not mourning…. For the present form of this world is passing away.” (1 Corinthians 7:30, 31 ESV) Here again, we rightly care about the world’s ups and downs (and in moderation we can grieve the downs), but we don’t get carried away, because we are “grateful for receiving a kingdom that cannot be shaken” (Hebrews 12:28 ESV).

Finally: “Fear not, little flock, for it is your Father’s good pleasure to give you the kingdom.” (Luke 12:32 ESV) Because our faith has a secure resting place in our generous Father, therefore we need not be afraid. And as we are set free from angst and anxiety by trusting God, we are increasingly free to love and serve others, including our enemies.

So take heart, my brothers and sisters. The sea may be dim-lit and windy, but the Lord is near. And He is good.